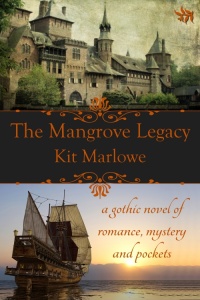 A Gothic novel of romance, mystery — and pockets!

Get the book from Tirgearr Publishing!

From behind the door Caroline Alice Mangrove could hear the unaccustomed sounds of disagreement between her parents; which is to say, she heard her father’s throat clear and her mother’s gentle weeping. Lord and Lady Mangrove had been arguing in near silence for many days on end. Alice (as she had been called since childhood when her nurse trembled before the three syllables of her initial name and, struck dumb, failed to speak again until the child was weaned) feared that the topic of their disagreement was likely to be her impending marriage. To whom she had been given was not yet clear. Her parents had come to some sort of impasse and the meaningful glances exchanged that morning at breakfast could only signal that things had worsened to nigh on a fever pitch. When she heard her father rustle his newspaper, Alice’s wide blue eyes brimmed with tears and she fled the chaos to take refuge in the solarium.

The gentle green fronds of the ferns and orchids soon soothed her troubled nerves. Life was a harrowing prospect when you were seventeen, unmarried and wealthy. It was a very dangerous age—almost too old but still in the realm of possible. Her parents had been too protective, she thought for the hundredth time. As if to chastise her for this disloyalty, the bland face of Mr. Radley, the gardener, appeared before her.

“Evening, Miss,” he said, pulling at his cap, oblivious to the fact that it was only mid-afternoon. “Mind the orchids, they’re a bit stroppy today. Forgot to water them yesterday.”

“Yes, Mr. Radley, I won’t be a moment,” Alice said hastily, gathering up the pages she had spread before her and blushing with embarrassment that he might see what she had. Why do dresses seldom have pockets, she thought crossly, folding the papers roughly.

“The philodendrons are all right,” Mr. Radley called, but Alice had already scurried for the library, hoping to encounter a sanctuary at last. But as she opened the door, whom should she find but her cousin Elizabeth Jane, whom everyone called Lizzie. Well, not the servants, obviously—they in fact called her Miss Elizabeth Jane. As if to demonstrate the fact, Mrs. Perkins stepped in behind her and said “Miss Elizabeth Jane, a letter has come for you.”

Alice was unprepared for the sudden change in her cousin, whose handsome face had blanched white. While she remained unmarried still at the age of twenty, there were those in the family who held out hope for the lively woman. To be fair, there were probably more who held that her very spirited nature was completely antithetical to the notion of marital union. Alice’s own father had set his seal upon her cousin’s fate at the St. Stephen’s banquet not three years past, when he had taken in his niece’s most recent witty retort and said, “Good god, woman, no decent man will marry you.” For some in the family, that was that.

Alice emerged suddenly from her reverie as her cousin gasped. Lizzie clutched the letter to her breast. “It’s from the King!”

“No, you — you misunderstand me,” her cousin stammered. “King, King — I only meant…Mr. King. In Harlow. The collector of…spindly-legged insects. You know my interest in insects of all kinds, Alice.” Lizzie seemed to have quite recovered herself, but for the slight pink flush at her neck. However, Alice did notice that she had also tucked the letter in question into the recesses of her sleeve. Hmmm, thought Alice, she had never considered the uses of sleeves. It would render pockets obsolete, although it would require one to wear unfashionably billowing sleeves.

“Insects,” Alice repeated with some suspicion still lurking in the shadows of her vocal tones.

“Insects!” Lizzie repeated with some of her former venom. “That will be all, Mrs. Perkins.” Lizzie waved off the hearty domestic. “My cousin and I have much to do.” The housekeeper looked distinctly disappointed as she curtseyed perfunctorily and slipped silently away, closing the library door with some evident reluctance. “I hope she’s not going to go gossiping,” Lizzie muttered once the door had whispered shut.

“I doubt Mrs. Perkins has much time for gossiping. There’s the laundry to manage, dishes to wash, dinner to direct — she has rather a lot to do,” Alice said, suddenly realizing what a trying life poor Mrs. Perkins must have. I shall not complain about the lumpy darns in my stockings ever again, she thought with a surge of pity that would be forgotten within a fortnight.

“I can only hope so,” Lizzie continued, oblivious to Alice’s ruminations. “Now if you’ll excuse me, I have to read the King’s letter.”

“Alice,” Lizzie said, softly stealing a glance at the door, “I have a secret to share with you.”

“Oh, I love secrets!” Alice crowed. “Tell me! Is it about that handsome young man we spotted talking to Mr. Bennett at the Assembly Ball last month?!”

Lizzie regarded her cousin with obvious puzzlement. “Why on earth should it be about him? No, no, it is about this letter.”

“Oh.” Alice had entertained many pleasing thoughts about that still nameless young man in the idle weeks since. “Oh, it’s not from Arthur Boylett,” she continued with dismay. She knew her father had leaned in his direction as far as her suitors went and was very cross to imagine that she may indeed have to marry that dull young man.

“Alice,” her cousin said, rousing her from a growing despondency, “Not everything is about you. This letter is actually from –” and she paused again to ascertain that they were alone in the library, then whispered, “From the King of Naples!”

“We paid Miss Travers far too well,” Lizzie said, frowning as Alice’s father was also apt to do when speaking of the recently sacked tutor. “No, Alice. Naples is in Italy.”

“The King. Of Naples.” Lizzie cocked an eyebrow at her younger cousin.

“Why is a king writing to you?” Alice asked at last.

Lizzie smiled. Alice had long ago noticed that when that happened, Lizzie looked very cunning indeed. It was most unbecoming in a lady. “We have worked out a plan to –”

Just then the door of the library flew open and very flustered Mrs. Perkins shot into the room again. “Oh, Miss Alice!” she sobbed, “Come quick, your mother needs you!”

“What is it, Mrs. Perkins,” Lizzie said, somewhat cross at having her own revelation upstaged.

Mrs. Perkins was wringing her hands as she blurted, “It’s your father, Miss Alice — he — he’s dead!”

Get the book from Tirgearr Publishing!