The Height of Absurdity: The Fairy Mound 8.4 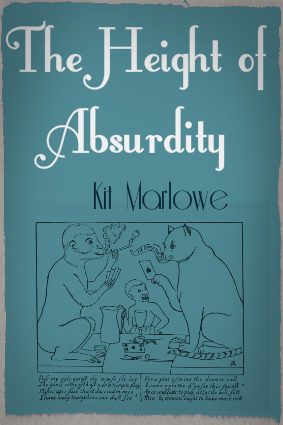 Tansy and I both gasped. I don’t know if it counted as absurdity, but it was certainly strange, though we had seen strangeness a-plenty. Nonetheless, I shivered a little as we crept into the cave. The velvet blackness let us sink into it like sudden night, but a starless one hiding between city walls. That’s when I noticed the other peculiarity: there was no sound.

I can’t say why I found it so unsettling. After all there was many a time my head ached for a little quiet even in the club, where I would seek out a plush chair near where some of the older members often sat, just to still the jarring noise inside my head for a little while. Quiet, although a punishment in the nursery, could be restorative I had often found. Tansy had a strange practice, taught to her by some mystic sort in the colonies, of sitting in silence in a sort of queer position every morning. He swore by its calming effects. It hadn’t been enough to get me to try to work my legs into a pretzel, but I could see the sense of it.

This silence was nothing like that practice. It was as if all the air had been removed from the black space, yet we could breath. The ground underfoot was so soft that I could not even catch a sound of our steps. I had a horrible feeling as if my ears had been muffled. I had to stifle the urge to shout loudly into the space, just to be sure that I could yet hear—though somehow the fear that I might not be able hear the sound halted that impulse, for I could imagine it being so.

My heart pounded until at last something became audible. My limbs flooded with a giddy sense of relief, even though the sound was that of running water.

‘I was concerned this might be a factor,’ Chambers said in the murky gloom, though I could not see him. He stood no more than an arm’s length away, I could tell by the nearness of his voice. ‘Fear not, my friends. Though we will get wet, we shall be dry anon. And the water ought go no higher than our waists.’

Tansy and I took a moment to transfer items from our trouser pockets to our waistcoats. I supposed the few coins in my pocket could remain there. Water would not hurt them any. I had fallen into the river punting many a time with no harm ever coming to a shilling.

The sound of the water grew louder and I was much relieved to find that the gloom of the cave grew perceptibly lighter. It is a deeply ingrained fear we have of the dark, probably from our most ancient memories of days in caves chasing tigers and whatnot. Things that might spook one in the dark ceased to frighten when dawn’s rosy fingers tapped them. But I knew I would sometime wake in the night with fear that I could hear nothing. The mere sound of my breath might be enough to reassure me then.

It sounded entirely unexpected at the moment.

In the dim light I could at last see the sparkle of water. Though I felt a natural distaste at wading into it, there was nonetheless something comfortable about the reality of feeling something after that uncomfortable silent darkness. The water was very wet. I feared it might be cold as well and braced for the shock, but it did not seem to be especially so despite the location. I always thought of caves as cold places and wondered why our ancestors might have been willing to shelter there (surely living in trees would have been much nicer and warmer but I suppose carpentry took a long time to develop as well).

Into the water we waded and as Chambers had warned, it got deeper and deeper until we were holding our arms well out of the waves. I suppose it helped that we had not encumbered ourselves with our extra baggage, but now I considered that if we were to go far there would be nothing to eat and that would be a fine pickle to be in. I could hear my stomach already thinking of rumbling.

Just then I saw light.

Mr Scott on Witchcraft »
« In Mourning
Join 6,317 other followers